We are proud to have León Muñoz Santini, founder of Gato Negro Ediciones, and Alan Smart from ‘Other Forms’ as our guests for a presentation at PrintRoom!

As continuation of the on going editorial research exercise Logocide, Logotomy and Logophagy —a dive of creation and experimentation into the possibilities of the nonsense as a subversion tool—, Gato Negro Ediciones will feature an exhibition of their recent work produced during a residency at the Frans Masereel Center (Kasterlee, BE). They will launch their most recent book, the massive limited edition Oh, the Normal.

Alan Smart will present Footnotes on a Fietsenplan: The Collision and Convergences of the Provo White Bicycle Plan,* detailing part of his research on the Dutch counterculture movement of the 1960s, Provo.

The publishers will develop a new collaborative publication which they  riso-print at PrintRoom in the days prior to the event. It is a continuation of a project initiated from the research by Alan Smart.

Before the presentation, there will be an informal ‘aperitif’ with snacks and drinks.

Since 2013, Gato Negro Ediciones has acted as a recognizably-urgent voice in independent publishing across the cultural realm. Advocating the liberty of thought, the Mexico City based press intentionally prints titles that challenge the so-often sequestered view of contemporary society. From political manifestos to art theory and prose, the books of Gato Negro do not wish to deconstruct reality through ornamental distractions that lately seem to have become an inevitable requisite within the modern history of publishing. Instead, Gato Negro embraces the deliberately-chosen content in its most primal form: straightforward and entire. And therefore, ever growing in context. The outcome of each publication is a dialogue between reader and creator — an ecological construction of selfhood that distills collective contemplation while all we do is live.

Other Forms is a mobile research and design collective working in multiple intersections of architecture, graphic design, and publishing. Other Forms considers how design reflects and critiques, in semi-autonomous marginal spaces, the material and social conditions of its practice. Other Forms is Jack Henrie Fisher and Alan Smart. 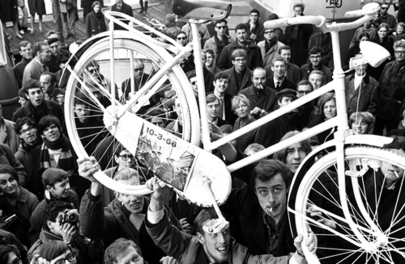 * Footnotes on a Fietsenplan: The Collisions and Convergences of the Provo White Bicycle Plan
The Provo Fietsenplan is among the better known of a series of “white plans” organized by the Provo movement—Amsterdam’s contribution to the array of subcultural insurgencies of the late 1960s. At once performance art, street theater, radical provocations, and more-or-less practical planning and policy proposals, white plans traversed aesthetic and political categories which had been aligned by modernism, but were then being destabilized and put under pressure. Concretely, the White Bicycle Plan was a simple proposition for a bicycle sharing program, presented as a Fluxus-style happening event for which a printed pamphlet provided a script or score. The score for the White Bicycle Plan was a simple, single page pamphlet written in ecstatic mode of beatnik neo-surrealism. I was, however able to create an intersection between a critique of technocratic planning, a conceptualization of urban space in, ‘late,’ post-Fordist, semiocapitalism, and a positing of new political subjectivities. By annotating its antecedents, and tracing its referents the fietsenplan can be used to translate between the languages of the these discourses, and understand this historical context, and the future—now contemporary—city it prefigured.

This entry was posted in Uncategorized. Bookmark the permalink.