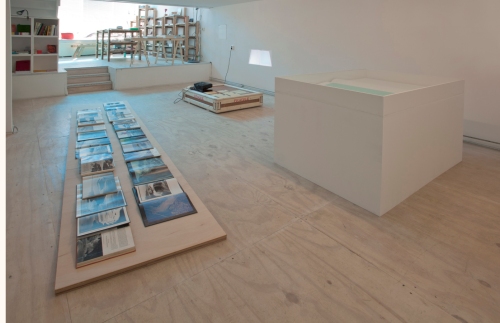 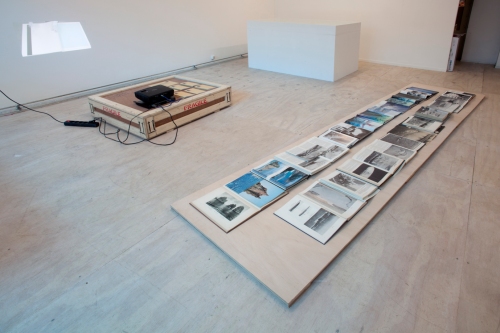 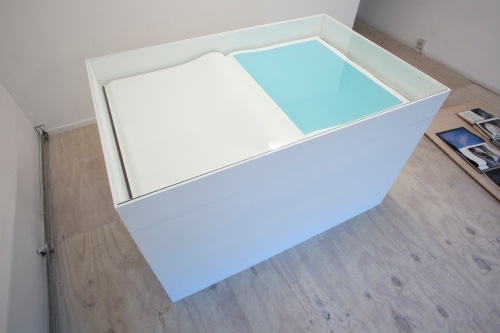 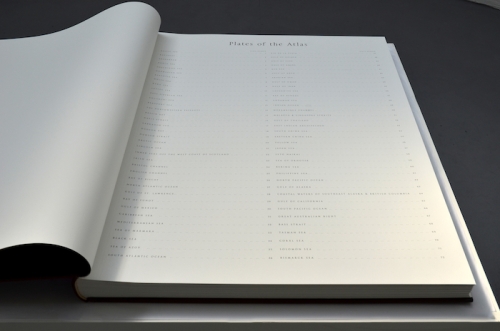 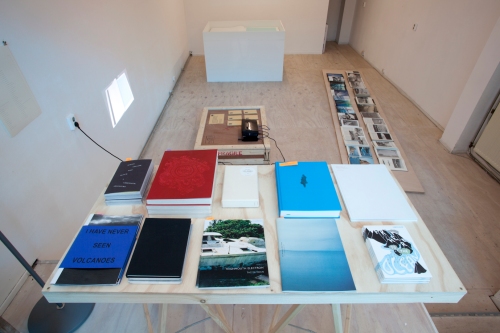 A book must be the axe for the frozen sea within us. – Franz Kafka in a letter to Oskar Pollak, 27 January 1904

The exhibition Two in the Wave presents two works concerned with the artistic treatment of printed–matter and the book, in light of our surrounding seas, oceans and the connotations these seemingly boundless expanses put forward. As advanced by the two works, there is a sensible retreat from the documentary image to its recovery in the element of the fictional. Both works share a formal approach towards their display: a characteristic that is inherent to the work, and furthermore positions a similar resonance present in the conventional means of displaying scientific material. In so doing, the exhibition foregrounds the engagement with alternative knowledge through the displacement and fictionalisation of collected imagery, the construction of systems of representation and the altering readings and stories this evokes.

The work The Seas and Oceans of the World (2012) by Thomas Jenkins (b. 1983, lives and works in London) shows a historically sized atlas, indexing the World’s seas and oceans through various shades of blue, all referenced from one particular atlas and thus using the general conventions as applied in mapmaking. Jenkins is interested in the human need to delineate and categorise our surroundings in order to cope with them. In the work he applies the artifice of mapping to a point of such simplicity that the act becomes absurd, underscoring one of our many behaviours perhaps borne out of a need, rather than simply out of curiosity or pleasure. Aside from these concerns Jenkins is also lost in the energy, beauty and romance of the sea, and found himself enchanted by the idea of containing those feelings and that power in a rectangle of blue on a page.

Batia Suter (b. 1967, lives and work in Amsterdam) will present the work Wave, floor version #1 (2012), a floor–based installation comprised of a selection of overlapping books featuring photographic illustrations of waves. In essence, the books and the display material form the sculptural structure of the work, whereas the images on the pages of the books correspond with each other into a somewhat poetic narrative strand in which applied photography and collage are combined to form a singular reading of a multiplicity of resources.

Two in the Wave will be accompanied by a number of artist publications and bookworks sharing a similar resonance and topicality, employed to showcase different perspectives and entries on the artistic engagement with bound volumes and the aquatic. In addition, the exhibition will see the release of a publication featuring a selected correspondence between Thomas Jenkins and Niekolaas Johannes Lekkerkerk on the work The Seas and Oceans of The World.

The title of the publication is CC, published in an edition of 100. CC is a collaboration between PrintRoom and Cahier. Get your copy at PrintRoom for 9 euro, or send an e-mail to info@printroom.org to order one.

This entry was posted in Uncategorized. Bookmark the permalink.